ARCHAEOLOGICAL DOWSING
Dowsing is used by civil engineers, the water board and mining companies to locate water sources etc. A lively question and answer session followed the talk and possible local uses for dowsing were explored
Tuesday 20 January 2015

A FALKLAND ISLANDS CHRISTMAS
In April 1982, most people in Britain had to get out an atlas to discover where the Falkland Islands were when the Argentinians invaded and Britain went to war to restore British rule successfully.
Paul and Ros flew to Saunders Island, Volunteer Point and Sea Lion Island – all remote areas, to view the fascinating wild life.   We felt part of a David Attenbrough documentary as we saw pictures of king,gemtoo, magellanic and rock hopper penguins, as well as albatross, turkey vultures and elephant seals. It was obviously a trip of a lifetime for them both and one we felt privileged to share during the illustrated talk.
Tuesday 16 December 2014

THE EVOLUTION and ADAPTATION of the GREAT WHALE 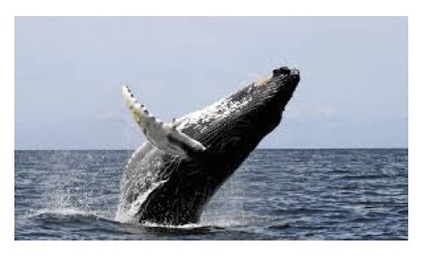 The world's largest mammal
We welcomed Rodney Veazey for our December talk and were enthralled by this fascinating lecture which was accompanied by Rodney and Felicity’s superb photographs taken on their travels researching these magnificent creatures. Their most recent visit was to the Azores.

The lecture began with an explanation of the evolution of whales which are descendents of land-dwelling animals, they evolved from herbivore to carnivore and they first took to the sea approximately 54 million years ago, their features becoming adapted for life in the marine environment. They are able to dive deeply into the ocean and hold their breath for an exceptional length of time.
We heard of many records which whales hold – the Sperm Whale weighs about 65 tons and can live up to 70 years and its sound can be heard
15 miles away and the Blue Whale is the largest creature to have ever lived on our planet. Each species of whale is individual with differences such as vocalisation and eating habits.

Much research has been done over the last 25 years and MRI scans have been undertaken on dead whales which have enabled much more to be learnt about their anatomy.

Rodney is passionate about the charity WDCS (Whale and Dolphin Conservation Society) which is based in Chippenham but has offices worldwide. Whales face many dangers which include shipping and also commercial hunting. Whales are known to be sociable but the subject of captivity for public display is controversial.

The evening ended with the members and visitors enjoying the delicious mince pies made by Pat Davies.

SPIDERS in the HOME and GARDEN
Do they bite? Yes but the majority don't have strong enough jaws to penetrate human skin. The false widow spider does bite but only if squashed and fortunately the venom doesn't affect us.

Do the females eat the males after mating? Not all of them do. Some live side by side in the same web. We also learnt that some female spiders are very maternal, carrying their young in a sac on their backs. On the other hand, the log wood spider guards her egg sac for three days after the young have hatched while they survive on the egg sac, then they eat the mother which would have died anyway.

They have either six or eight eyes. Some hunt using sight, whereas those which can barely distinguish day and night and live in burrows hunt using touch.

What happens when you or your partner removes a spider from your house and puts it out in the garden? It won't survive. We should really welcome them into our homes as they do no harm and control the fly population which spreads germs and diseases.

After his talk Bill was bombarded with questions which continued informally during coffee. He showed  some  pictures of webs, explaining that different web designs suited the hunting habits of different species. Perhaps the subject of a future talk.