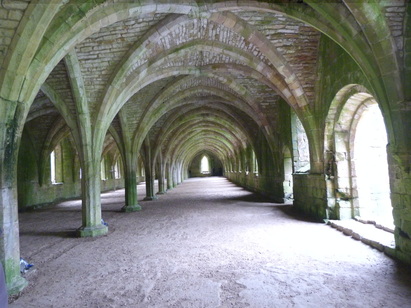 On Saturday, in misty weather, we visited Fountains Abbey which was founded in 1132 by 13 monks from York and which became very wealthy.  Wealth was gained from rich people paying for prayers for when they died, to ensure a smooth route to heaven!

We were given a fascinating tour of the vast ruins by an excellent guide who described the daily routine of the Cistercian order.

The abbey was self-sufficient with its own mill and various workshops plus houses for visitors.  Also, there were the Sudeley Gardens which were in the style of Stourhead. 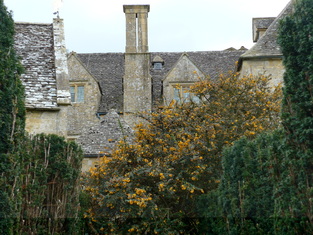 Later, we travelled on to Beningbrough Hall.   This was a very attractive, symmetrical, brick-built Georgian house, housing a collection of royal portraits form George 1 to the present day and pictures from the Royal Portrait Gallery in London.   On Sunday, the day was devoted to visiting York.

Most  members went on two walking tours of the city, taking in the history and age of the buildings as well as enjoying the view of the minster from the walls.  We learned that a small alley is known as a “snicket”.  The history of the city dates from Roman times (around 200AD).  Constantine was proclaimed Emperor whilst in York and the Emperor Severus was buried there.  The city grew to become an important centre for trade and political influence but declined during the 1800s as industries developed in areas like Leeds.


Sir Walter Scott helped to revive York as a tourist centre including saving the walls from demolition.  After lunch, some members visited the Yorvik Viking centre and afterwards, several attended Choral Evensong at the minster, a peaceful end to a busy day.  On our way home on the Monday, we stopped at Calke Abbey, a country house which evolved from what had been a priory.   Owned latterly by an eccentric family, the house was full of hidden treasures including stuffed birds and animals, family portraits and a stunning state bed dating from 1734.   There was also an attractive walled garden, orangery, church and nature reserve.

As a postscript,  Jane Cox who has been investigating medieval life in Box, found a link in Calke Abbey to the Bigod family!    A highly enjoyable weekend away was had by all !
The weekend away nearly didn’t happen this year as Hatts, the coach company, fell into administration  just  before we were due to travel.   Fortunately, Brian Hatton and Tom Cox rode to the rescue and found a replacement coach company, Barnes.  Ably organized by Tom and Jane Cox, we travelled to the very attractive area around York.
Summer Outings in 2014
Thursday 14 August 2014

BLETCHLEY PARK
It was agreed that although the journey there and back was long, and that we did not have enough time to view everything, it had been worthwhile to visit the place which heralded the birth of the information age. We experienced a unique and cultural day out.
Bletchley Park – The Modern World was born here!
Tuesday 15 July 2014