Talks in our Winter Programme 2015-16
Tuesday 15th March 2016
SAVE THE HEDGEHOG, SAVE THE WORLD!
We have all seen dead hedgehogs by the roadside but this sight is increasingly rare and almost welcomed by hedgehog researchers as it at least means hedgehogs have been around. Motorways are not just a problem because of the volume and speed of traffic but also because their concrete central barriers are impenetrable. Flying wildlife like birds, insects and butterflies are not affected but 100,000 hedgehogs are killed every year on the roads.

Hedgehogs need an awesome amount of space for their ‘runs’ and need to be connected with other hedgehogs.  What can we do? Compost heaps and log piles in our gardens are good habitat and we are urged to make sure hedgehogs can enter and leave our gardens to travel freely. One way is to talk to our neighbours and cut a hole in the adjoining fence!  ‘Hedgehog Streets’ are encouraged. We can sign a Private member’s Bill seeking legal protection for Hedgehogs. I was left reflecting on the worldwide situation of the severe pressure on wildlife caused by ourselves, a disproportionate success story.

Hugh’s strong message was lightened by his terrific sense of humour.  ‘Hedgehogs cleared of corn circle’ dementia’ was one headline! A male chases round and round a female before mating, which of course needs a female to lower her prickles, but the size of the circles they make would need 40,000 circling hedgehogs to make a corn circle! In America, where pygmy hedgehogs are popular pets, Hedgehog Olympic Gymborees are held.

On a final note, Hugh says hedgehogs simply make people happy. It’s not enough just to like them, we must love them enough to do something to help keep this precious animal.

Tuesday 16th February 2016
WHERE DID THEY COME FROM & HOW DID THEY GET THERE?
Funding for these glass cathedrals came via the Royal Society and benefactors such as the Earl of Bute.   Arboretums started as personal tree collections of wealthy landowners but, nowadays, places like Westonbirt help to preserve endangered species from around the world.
The Society is due to visit Westonbirt Arboretum in April for a tour of the site and a view of the magnificent trees grown there.
Tuesday 19th January 2016
DRY SHOD TO CHIPPENHAM
A WALK ALONG MAUD HEATH'S CAUSEWAY
A sundial was erected to mark the 50th anniversary of Maud heath’s bequest, at East Tytherton at the bottom of Wick Hill, in 1974, together with four benches set along the route.
#
Dr Taylor also mentioned the construction of the Causeway, the work of the trustees, the religion and schooling in the area and also the development of rural roads and railways.  There was much content to cover, and time, unfortunately, eventually ran out.
Tuesday 15th December 2015
TO DIG OR NOT TO DIG --
AIR PHOTOGRAPHY, GEOPHYSICS AND LANDSCAPE ARCHAEOLOGY
People began to identify iron-age fields, previously unknown Roman villas, even medieval crofts with green lanes leading into communal strip-fields. After ploughing, soil marks revealed pre-historic burial pits with darker soil.

This was only the start of a technical revolution in archaeological discovery. We often hear Tony Robinson on Time Team talking about geophys (geophysical surveying of sites) which enabled mapping of underground buildings and features. The process involves measurement of resistance to electrical or radar penetration of the soil. More recently, LIDAR (light detection and ranging) was developed as a laser-scanning process to see through trees and densely-overgrown areas. But its main use has been to strip back layers of history to set depths in the ground. This has shown how Saxon fields sometimes overlay earlier Iron Age landscapes.

Mark showed us scores of photos of the discoveries found using these techniques, including entire Roman towns, long barrows and round houses. Then he challenged us to identify the map below. 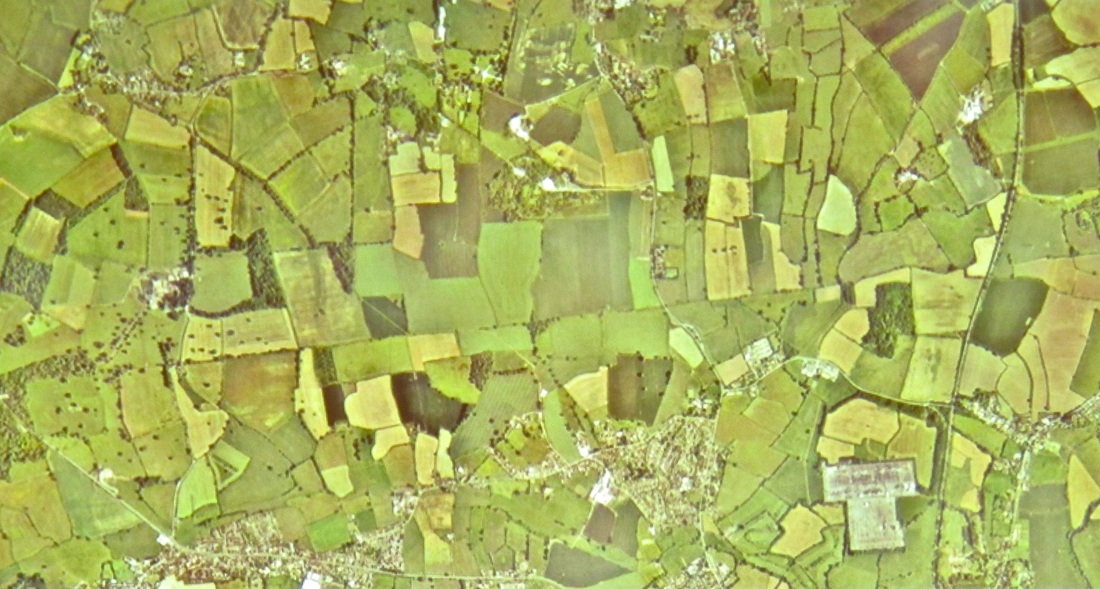 Of course it was the southern boundary of the village of Box showing how the border was adopted along the line of the Roman road which ran from Mildenhall, near Marlborough, to Bath. To prove it Mark showed the following map. 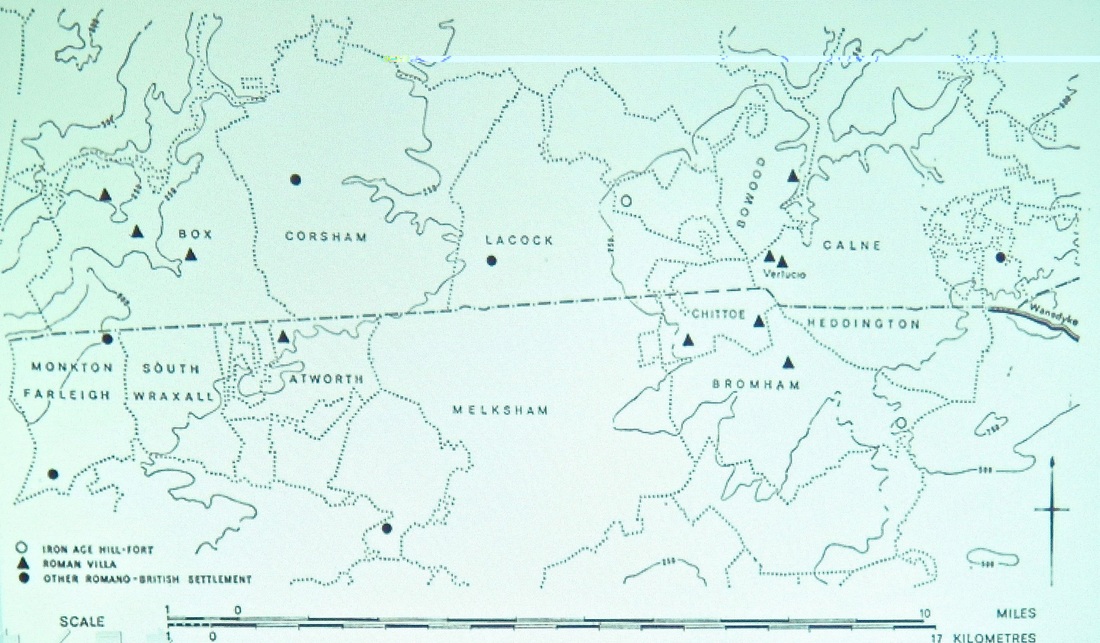 ROLLERCOASTERS, EARTHQUAKES AND MALTESERS featured in geologist ELIZABETH DEVON’S enthralling and professional presentation entitled ‘Amazing Planet’ to  Box Nats. Unlike our usual pattern of lectures when the speaker uses slides to illustrate their talk we were faced with a table filled with common household items such as a cheese grater, jugs of water and a small fish tank.

There was much audience participation and I will attempt to describe some of the demonstrations and experiments we enjoyed. We began by acting out being on a rollercoaster which was travelling east 10 times faster than any other. Due to the spin and rotation of the earth we would be travelling at 647 mph here but 1040 mph at the equator.

Once we had caught our breath we were then shown a demonstration of circulation in the atmosphere and ocean in a fish tank! Hot and cold coloured liquids were poured into the tank to illustrate how warm & cold ocean currents control much of the atmospheric and oceanic circulation.

The Evolution Game with ‘Beany Beetles’ was good fun – we learnt about the natural processes that result in evolution with camouflage and colour. Following ‘Crystallization' in a pudding dish in which Maltesers were used to demonstrate the simulation, formation and growth of crystal lattices in nature we were able to eat the Maltesers!

Other experiments covered Magnetism and ‘Why won’t my compass work on the other side of the Equator? A Slinky Spring was used to simulate earthquake activity and a simple model of three high rise buildings demonstrated how earthquakes affect different buildings (Shaken but not Stirred!)

‘Journey to the Centre of the Earth’ with a toilet roll demonstrated how thin the earth’s crust is in relation to the rest of the earth. Our toilet roll with each sheet representing 100km was unraveled and taken around the room to illustrate this.

To quote Elizabeth: “Our Earth is one of billions of planets orbiting stars in the visible Universe. If you imagine a star as a fine grain of sand, you would need a box of sand a mile long, a mile high and a mile wide just for the stars. There are many more planets of which we are one. Until we can colonise another one, we must look after the one we have got. To do that properly we need to understand it and that is why I do what I do”. These comments would be endorsed by those who attended Elizabeth’s talk.
Tuesday 20th October 2015
THE HISTORY & WILDLIFE OF SRI LANKA

Our opening Winter meeting on 20 October started at full throttle with an absorbing talk and film show by RODNEY VEAZEY on ‘Sri Lanka, Pearl of the Indian Ocean’. Always guaranteed to please, his delivery was well constructed with pithy detail and pictures. The earliest settlers were the Sinhalese from India in 500BC and one picture showed an early Buddhist building, one of the largest brick structures in the world by volume.  Construction of dams from the 3rd Century BC created much needed reservoirs of considerable capacity which are invaluable wildlife refuges today.

Social history of the island continued with occupation by the Portuguese, Dutch and ourselves. The tragedy of the violent displacement of the resident population by the occupying foreign powers and religious conflict was graphically described. Sri Lanka gained its independence in 1948. On a brighter note, we were entertained with wonderful footage of the abundant wildlife. My favourite was a film of a young Indian elephant swimming and looking for all the world like the Loch Ness Monster! We enjoyed pictures of the colourful   Pied Malabar Hornbill and the Blue Whale, the largest living mammal and not easily seen.

The abundance of questions at the end of the talk reflected the great interest Rodney generated in the subject, delivered in a professional and humorous manner.
Powered by