The Story of Box Archaeological and Natural History Society:

Extracts from the archives and records collected by Roy Hodges 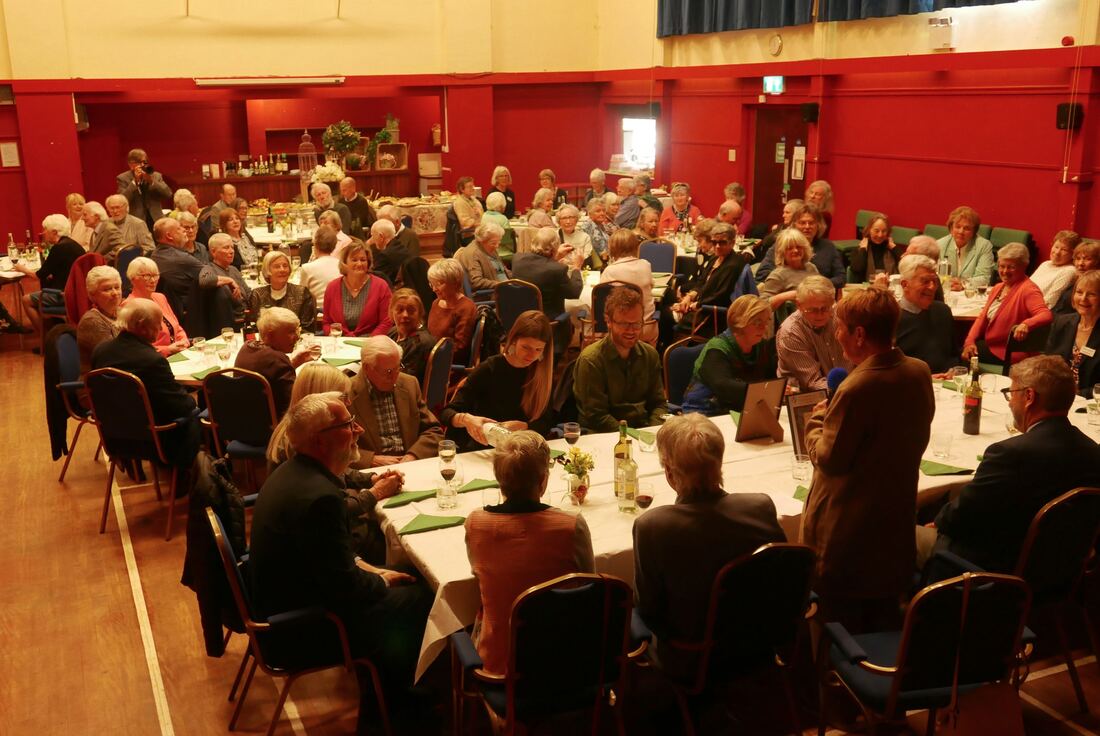 The commemorative lunch in Selwyn Hall was packed out
​Box Archaeological and Natural History Society (Box NATS) was conceived over 45 years ago by a couple of 16 year-old Box A-level students with an enthusiasm for natural history and the history of the village, Richard Hodges and Alison Borthwick. They were inspired by the 1967-68 excavation of Box's Roman Villa when the Selwyn Hall was built and a series of lectures given by the Workers' Education Association.

Richard and Alison ran the society for the first two years until they both left to go to university in 1970 and the society was quickly obliged to establish its own, secure roots. From the outset, it had serious ambitions and it evolved into a research and dynamic interest group as well. It saw its purpose as the revitalisation of the very heart of Box, the understanding and conservation of the rural character of the village and beyond. The full list of committee officers is given below and the success of the organisation is due in considerable part to the hard work of this small band of organisers as well as the enthusiasm of the people of Box.
Above left: Henry Hurst, archaeologist of Selwyn Hall who inspired the project, Jenny Hobbs chairman, Richard Hodges President and Buffy Freeman, secretary
Above Right: Jenny and Vice President John Chandler, husband of the late Alison Borthwick
In the Beginning: the Year 1969
The society was formally constituted in February 1969. The enormously wide range of activities was shown from the start and all seemed well. But, as the report below shows, the resolve of members was tested from the outset and villagers had to show their mettle. Richard Hodges (in his role as field secretary) reported: We had a stimulating first field event with Mr Grant King, [1] who led a marvellous expedition along the Wansdyke. Though it snowed, hailed, rained and blew before the sun shone, and despite several members getting lost, one member said afterwards, "it was a privilege to be involved in such an event." That rather sums up the attitude of resilient fortitude of all who still enjoy the society's activities.

The range of events can be seen in the first year's programme of events. Outings included a botany walk from Rudloe to Weavern by Mrs Joan Swanborough, which recorded over 90 species of flower. Mr Henry Hurst (the chief field archaeologist of the Selwyn Hall site) gave a tour around Chedworth Roman Villa followed by the excavations in Gloucester and Mr HG Ward guided a Fungi Foray with picking instructions in the Savernake Forest.

Vicar Tom Selwyn-Smith and Stuart Hills of Ditteridge led a group walk on a little pilgrimage around Hazelbury Manor and Chapel Plaister. Vicar Tom was always a great supporter of the organisation. There were many more trips: a Stubble Walk over Ditteridge Plain, across Marlborough Downs to keep a footpath open, to Devizes Museum to view the 1901-4 Box Roman Villa exhibits and a coach outing to view bird life in Chew Valley Lake.

The talks that year also set the tone for the diversity of projects. They were started by Professor R Atkinson who gave a lecture about Silbury Hill. This was followed by Butterflies, Flora and Box Parish and a later one concerning excavations by Mr Hurst in Mr Hughes' garden, both being held at the school. Perhaps the highlight was a talk to an audience of 60 in the newly-finished Selwyn Hall by two speakers: Mr Kenneth Hudson, who spoke about industrial archaeology; and the Box Caving Club, who described the quarries under Box Hill.

All of the hard work and commitment achieved success and the year was crowned off by a report from Mr Grant King. He confirmed that Wiltshire County Council accepted the Marlborough Downs footpath should be maintained, adding that the NATS' walk had swung the balance, and that access gates had now been installed in the barbed wire fence along the Wansdyke. What a start that was and of course it fired the imagination and enthusiasm of people to join!

There is simply too much to record the details of every year, so the following is an extract of the organisation's activities.
By 1975 presidential roles were added: Mr D Grant King president and Mr Henry Hurst vice-president (later joint president) in recognition of their assistance in the early days. When Frank Hughes was unable to continue in 1979, Roy was appointed chairman in his place and Frank was promoted to president with Richard Hodges and Alison Borthwick as vice-presidents. Alison became president in 1990 but sadly passed away in 2001.

By 1976, Richard Hodges was working as a lecturer at Sheffield University and was awarded an OBE in 1995. It is greatly to his credit that he has never forgotten his early days in Box and still presides over the society, despite currently living abroad.
Local Surveys
Research of the village has been an integral part of the NATS' work from the beginning, every bit as important as having some highly entertaining talks and outings. There were three distinct (and increasingly professional) attempts to undertake a flora survey in Box in the early years. On 18 June 1977 the Chippenham News reported, Twenty members carried out a point botany study along the By Brook at Box and on Kingsdown. The party walked from Box to Shockerwick via the brook, and by footpaths to Kingsdown. The party were unexpectedly pleased to record 25 specimens of the common spotted orchid. It was the precursor to a whole series of Botany Research Walks after 1980.

The 1979 programme of events was distinguished by the introduction of Botany Survey Walks. It was recognised that Mrs Joan Swanborough's field expeditions could be developed into useful local research. Following a lecture by the Botanical Society of the British Isles, Box NATS organised a programme of twelve walks in the summer of 1979, starting in March co-ordinated by Joan Woodgate.

The botany of Box Hill Common was the subject of the 1981 survey. It had been purchased by the Parish Council two years earlier so that it could remain for the use and pleasure of everyone, for always. Seven walks were arranged but the first walk in April had to be cancelled because of a heavy snowfall and the last one in October abandoned because of a very wet period which caused all the flowering plants to die early. Nonetheless the survey is still the definitive report on Box Hill Common, recording a total of 202 natural flowering plants.

At the 1984 Annual General Meeting, before eighty members, Roy Hodges announced an initiative by Joan Woodgate for an eight-year Wiltshire Flora Mapping project under the guidance of the Wiltshire Trust for Nature Conservation. It was the most ambitious project that the society had attempted to date.
Footpath Walks
There were many Footpath Walks organised by the NATS and led by Barbara Higgens in the years after 1977. The objective was to set-up a regular recording group within the Parish in conjunction with Wiltshire County Council.

It was supported by the Parish Council who in 1977 declared they wished to encourage this and to make it possible for more use to be made of the 89 footpaths in the parish. The council organised signage and issued a pamphlet Footpaths Around Box, written by Barbara Higgens. The NATS committee undertook the organisation of trying to walk every single path on a regular basis and members helped with maintenance, cutting back of hedges and weeding. In February 1978 five members joined together to construct stiles. By 1996 the walks had taken a life of their own and the organisation of them was devolved back to the Parish Council.
Weekend Breaks
The outings were so popular that after 1990 it was decided to go further afield with weekend breaks travelling by car until 2002 and then by coach and staying away for up to  three nights.

In 2012 the weekend away was based in Chester. The first stop was in Hereford for a guided tour of the Cathedral and a visit to the Mappa Mundi and chained library. Then off to Jodrell Bank to enjoy the new visitors' centre. The weekend continued with a tour of Quarry Bank Mill and a ferry ride across the Mersey. Sunday ended with a tour of the Tudor mansion, Speke Hall. On the way home we visited Ludlow to view the castle and the stained glass windows of the parish church of St Laurence. 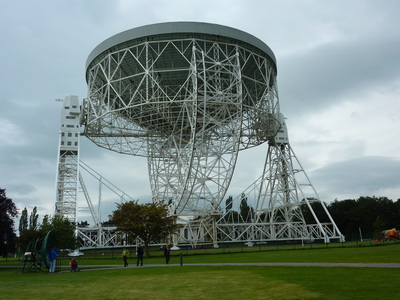 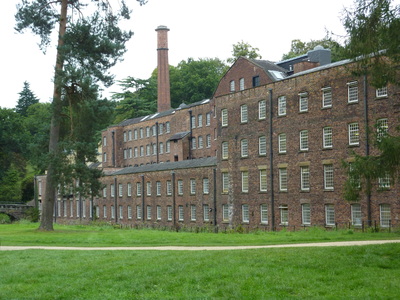 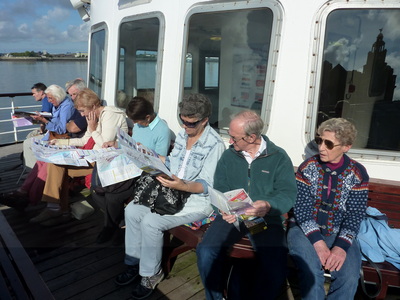 Talks
There are too many to record thanks to each and every speaker but here are just a few that caught my imagination as being unique in their subject matter.

January 1977
Mr W Ford gave a talk about a more scientific approach to archaeology. He spoke about the work of his laboratory team in Trowbridge, repairing and conserving artefacts of historic interest. They had started work on the Pitt Rivers Museum collection and Mr Ford illustrated his talk with reference to local material from Ditteridge. He went on to show aerial photographs and how they can help identify sites of historic interest.
It was all very new in those days of great interest to the audience, who thoroughly enjoyed the evening.

October 1978
What can we learn from Skeletons? An Illustrated Guide. Mr Hedley Hall gave a most stimulating lecture on the subject of bones and archaeology, admiring the surgeon's skill still apparent in the way in which fractures had healed. He said that males had decreased in average height by
1 inch over the last 2,000 years whilst females had increased by this amount.

January 1983
Two films were shown about water: On Tap, a descriptive documentary on the subject of water supply by Mr Miller of Bristol Waterworks Company, and Man-made for Nature, by Maurice Tibbles, formerly shown on BBC Horizon series. This film was a delight to the eye and an encouragement for the future, showing that it is possible to reconcile development of a natural resource with wildlife conservation.
Your memories and photos of events would be greatly appreciated, so please get in touch if you can add to the story. If you would like to join
Box NATS please contact Buffy Freeman or just come along to a meeting currently being held on the third Tuesday of winter months in the Methodist Hall, details of meetings on Forthcoming at heading or email contact address: boxnats@hotmail.com
Notes
[1] Mr Grant King had been involved in the restoration work at Avebury with Alexander Keiller in 1938.
[2] Gill Huggins was secretary for 8 years; Edith Woolford was treasurer for 10 years; Frank Hughes was involved for over 10 years and later a tree was planted at the top of the Rec in his memory.
Powered by