Here are reports of the events we enjoyed during summer 2018

The President's Outing - Into Deepest Zummerzet May 2018 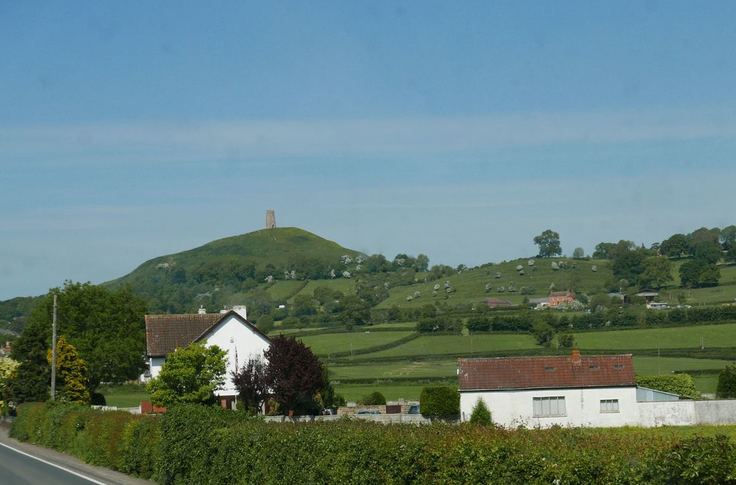 The Vice President's Outing in May 2018 took us into deepest, darkest Somerset, with a fascinating meander around the ancient, rural towns and villages of the county. Dr John Chandler's knowledge of the hidden history of the area is a much enjoyed part of the Box NATS annual calendar and this year's tour took us to cloth-maker cottages, a Quaker Arts and Crafts estate, twelfth century bishop's holiday home and the church celebrating the Sedgefield trials of notorious hanging judge, Judge Jefferies.

Houses For All
We started our tour in the Trinity area of Frome, where town clothiers built a planned grid of 300 gable-ended cottages for their workers after 1660, said to be an early example of industrial housing. Daniel Defoe said that the village was larger than Bath in his time and this fascinating area confirmed how densely packed the village was.
It was interesting to compare the Frome housing (above left) with our next stop at Street where the Quaker family of C&J Clark constructed marvellous Arts and Crafts housing for their employees in the late 1800s (above right). We walked around mini-estates with names of Chestnuts, Acacias and Laburnums, marvelled at the 70 year-old heated, open-air swimming pool (in great demand in the sunshine) and were full of admiration for the Quaker Meeting House, who kindly entertained us to morning coffee in between their services. The graveyard of the meeting house was fascinating with rich and poor alike being honoured with a simple, plain grave marker. It couldn't have been more different to our next stop. 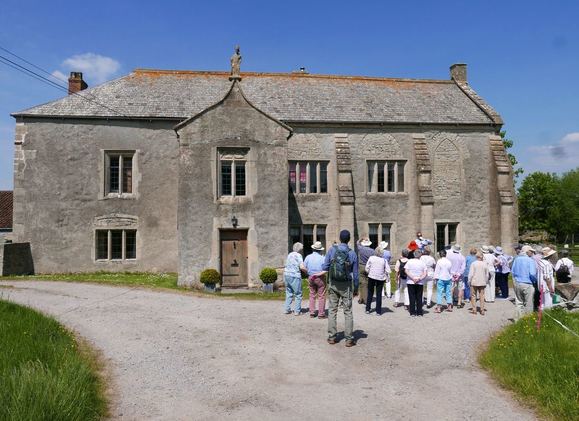 We were treated to another great welcome at Meare Manor House (above) where farmer Robin Look showed us his work restoring the twelfth century holiday home of the Abbot of Glastonbury. He explained the development of the first floor chapel, its medieval main hall and a later manor house. His ancestors had lived in the property since 1778. Close to the River Brue and set in the heart of the Somerset levels, the area is below the sea level and we went to visit the old Fish House, dating from 1330.

Our return through the Somerset Levels showed signs of earlier habitation from about 4,000 BC. Villages had been built on timber and clay bases in the water-saturated areas, connected by an ancient, wooden trackway, now known as the Sweet Track.

Monmouth Rebellion in Somerset
The day had started at Frome, a notoriously free-spirited area, which was one of the first towns to support the Duke of Monmouth who had tried to overthrow the Catholic James II in 1685. We ended the day with more about this West Country Rebellion when 27 Royalist soldiers were killed and buried in the churchyard of Westonzoyland Church. The Bloody Assize of Judge Jefferies took a terrible revenge with the bodies of rebels hung on gibbets along the road to Bridgwater. It was the last major battle where Englishmen fought Englishmen.

The magnificent four-level tower of St Mary's Church and its beautiful wooden carved ceiling belied the bloody history of the Sedgemoor battle and the warm hospitality of the museum and its staff proved a marvellous way to conclude the day.

DRYHAM PARK
On a hot afternoon in June, a group of Box NATS visited Whitefield meadow at Dyrham Park.

The name was particularly apt as the field was covered in a sea of white “moon” daisies (see picture below).  Led by Pauline Wilson, a National Trust volunteer botanist, and Viki Hess, enthusiastic amateur botanist, we spent a happy time spotting a variety of wild flowers.  The field was arable until 1990 but was then left to naturalise by the National Trust.  Yellow rattle was encouraged as it suppressed the limestone grass.  We spotted two types of orchid, common spotted and pyramid types.  We had hoped to see bee orchids but they had already flowered due to the recent hot weather.  Other wild flowers were pointed out, such as common broom rake, goats beard, common knapweed, hop trefoil and cinque foil.  We also saw marble white and meadow brown butterflies but no bees, possibly because it was a breezy afternoon.

There were splendid views from the meadow towards the Severn valley and Welsh hills to the West and Somerset to the South.  After a happy meander through the meadow, we caught the Dyrham Park bus down to the main house for a well-earned cup-of-tea and slice of cake! 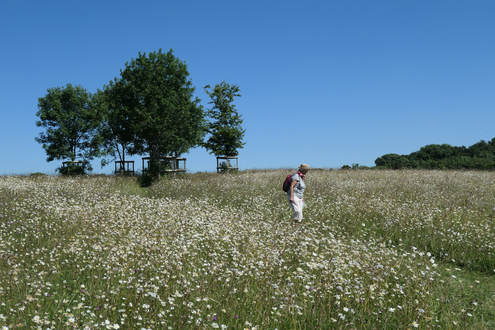 On a hot day in late July we visited the hidden gem in rural Oxfordshire that is Kelmscott Manor.  On just such a day in the summer of 1871 William Morris, the founder of the Arts and Crafts Movement, first saw the 17th century Cotswold stone farmhouse and described it as “heaven on earth”.  He rented the property with his friend, Dante Gabriel Rossetti, and it became his country retreat and inspiration for much of his thinking and writing until his death in 1896.  To Morris, the designer, craftsman and early conservationist, the appeal of this many-gabled, traditional, craft-built house, was that it had remained largely unchanged retaining all the integrity of the original.

After a brief stop in Lechlade we wound our way through the sultry Oxfordshire country lanes and arrived at the small hamlet of Kelmscott with its 12th  Century church, the last resting place of Morris, his wife, Jane, and their two daughters, Jenny and May.  After exploring the garden and village, we enjoyed a ploughman’s lunch, followed by a very informative talk on the history of the Manor and the Morris connection.  After Morris’s death the house eventually came into the ownership of the Society of Antiquaries and this body, with the aid of the Society for the Protection of Ancient Buildings, sympathetically restored Kelmscott to the beautiful, atmospheric house that it is today.

We then explored the house where many rooms contain some of the original oak furniture of the earliest occupants, retained by Morris for its simplicity and functional craftsmanship.   There is also furniture designed by his contemporaries, notably Philip Webb, his co-founder of the Arts and Crafts movement. There are many works by his circle including paintings of Jane by Rossetti. Everywhere there are homely objects from Morris’s travels, evidence of his appreciation of good craftsmanship.

In the intimate and very domestic space of these rooms there are also examples of the practical artistry of Morris and his family.  The four-poster bed in Morris’s bed-room was a family project
with a pelmet containing a poem composed by himself and then designed and worked by May, who also made the bed curtains; the bedspread was made by Jane. Throughout the house, adding colour to all the interiors, there are examples of the iconic textiles and wall decoration for which William Morris is principally known, products of his London design company. The whole effect is of light, colour and space, a world away from the dark clutter with which one often associates Victorian England.

At the end of the afternoon, after a welcome cup of tea and home-made biscuits, we left this
magical place with its lingering sense of a gentler and genteel past and with some understanding of Morris’s love of this beautiful house in a peaceful corner of Oxfordshire. 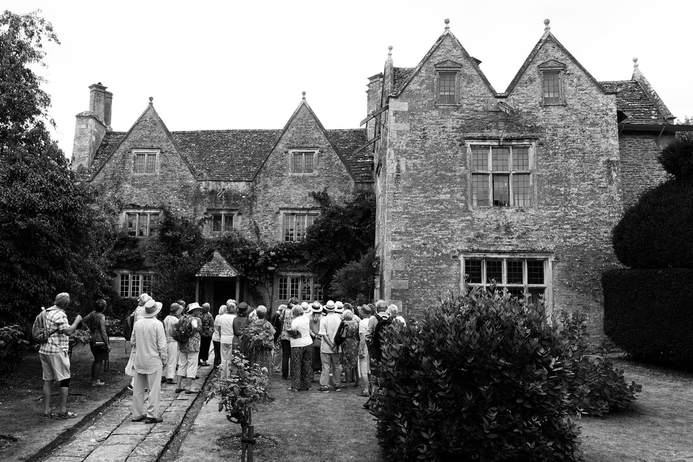 The Society was formed nearly 50 years ago at which time the founder members took part in some archaeological digs. Since then individual members have been on local digs but not until this August did we hire a coach which took 27 of us for the day to the village of Trellech, some 6 miles south of Monmouth, to the site of a medieval village being excavated by Stuart Wilson who had previously given a talk about the site to the Society in December last year.

Included in our party were three students who intend to study archaeology at university and who were sponsored for this dig by the Society.

Trellech was one of the major towns of medieval Wales. It is most likely that the town was established by the De Clare family specifically for the exploitation of local supplies ofiron ore, from theForest of Dean, andcharcoal, produced in the surrounding woodlands, to provide weapons, armour and iron work for their military advances in Wales, including the building of Caerphilly Castle . By 1288 there were 378burgage plots recorded in Trellech, which would have made it bigger thanCardiff or Chepstow at the time.

On arrival in the village, several of our party headed straight for the site where Stuart provided trowels, kneeling mats, buckets, trays for any "finds" and wheel barrows for the removal of waste. He then instructed us on the procedure we should follow and where we should dig. The rest stopped for coffee at the Red Lion for a coffee before heading for the dig site. The photo bottom right shows the intensity of the searchers.

Lunch time soon arrived, with some staying on site for a picnic, while others returned to the pub for an excellent finger buffet. Afterwards some returned to do more digging, others explored the village, particularly the grade 1 listed church of St Nicholas and the three bronze age standing stones known as Harold's stones before returning to the site.

Stuart spent some time producing artefacts which had previously been found on site and asked us to identify them. He then explained the exact purpose of each one.  Stuart also gave us a tour of the site explaining what each feature was, [photo bottom left].

We didn't make any significant finds, but we did unearth numerous pieces of pottery. Our coach was scheduled to leave at 4.30 pm so we had to reluctantly stow away our tools when we would have liked  to stay longer to unearth that "one major find".

We all enjoyed the experience and our students were give certificates which will prove useful on their CVs.

BOX NATS headed for Cambridge for their 2018 weekend away 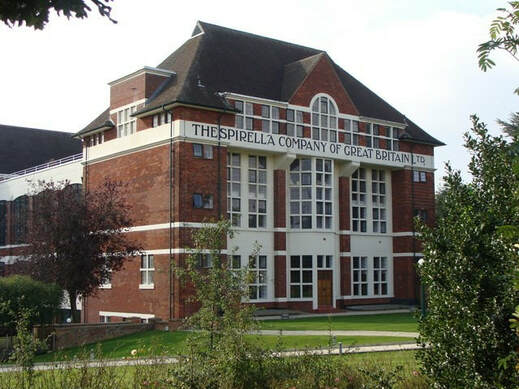 The Spirella Corset Company in Letchworth offered its employees, baths, showers, gym classes and bicycle repairs, etc. It was way ahead of its time.
Letchworth boasts the first roundabout in the country.
Photo by Ruth Sharville
Day 2: Ely and Flag Fen 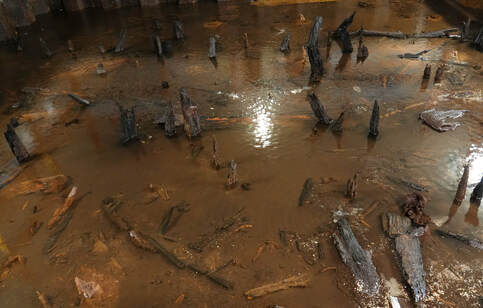 Flag Fen Archaeological Park is a few miles east of Peterborough. It is home to a kilometer long wooden causeway built 3,300 years ago, part of which has been preserved and is on view. Bronze Age log boats discovered at nearby Must Farm are being preserved on site.
Day 3 Cambridge
Day 4: St Albans and Cliveden (NT) near Maidenhead 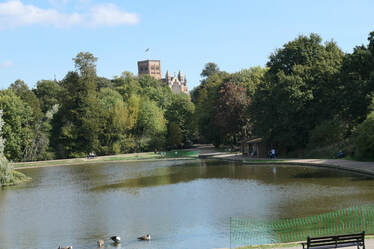 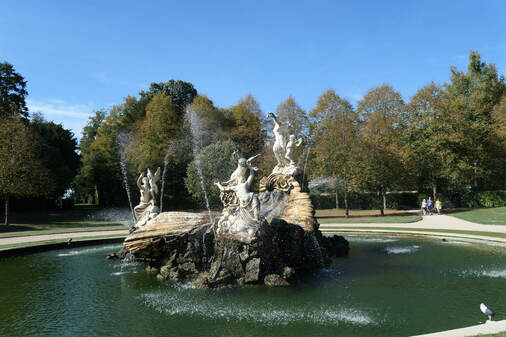 The Fountain of Love, Cliveden
Powered by